Well, will you look at that – we finallly got around to making a post about our vacation in Spain this summer! It took us a while, because there were a lot of photos to sort through, but here we are, writing about it. 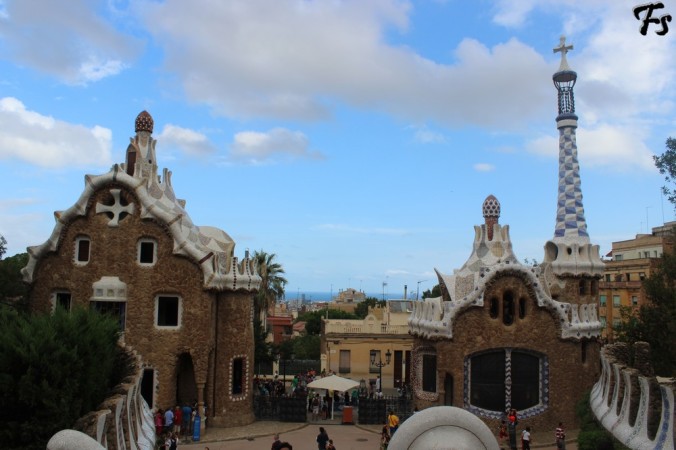 Technically, it was a family vacation; my family decided to go to Catalonia for our annual summer vacation, and because I’ve grown quite tired of the constant tensing between certain relatives of mine, I’ve decided that I would not join them unless Frodo came with me. And, I mean, my family might not be the coolest people on this planet, but they’re all right when it comes down to it, and it was a free vacation, in Spain, so why would Frodo say no? (I may or may not have bullied her into coming with me. But she’s never been to Barcelona, and we wanted to go but hadn’t found the time or money to do it, and now we had both, so I don’t feel particularly guilty).

Anyway, here’s the post about it. It’s mostly pictures, of course, because, let’s face it, we’re not exactly adventurous, and usually play it safe with planning ahead and whatnot.

As stated above, we went to Catalonia, and stayed in a house about an hour and a half from Barcelona, upcountry. The house was at the end of a 3km long gravel road between two towns about as big as my thumb; it was the end of nowhere, really. There were nothing but pigs around, so the smell was somewhat hard to adjust to, but the smell only bothered us when the wind blew it our way, which it rarely did, thank Chuck.

That was pretty much  what it looked like. We only stayed in a small part of that building, though – big enough for all of us nonetheless. And it had a pool. So no complaining from this end. And the view was truly fantastic.

We did a few daytrips from their, one of which was to the Monestir de Poblet, a very old monestery that is still in use. It’s one of three sister-monesteries. Pretty much every Aragonese king’s burried in there. And that’s about all I know about the history of it. Google it if you’re interested; from what I gather, it’s got some cool history. 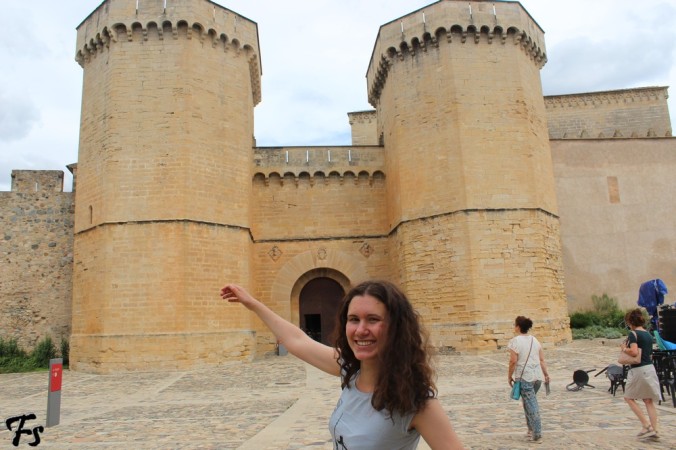 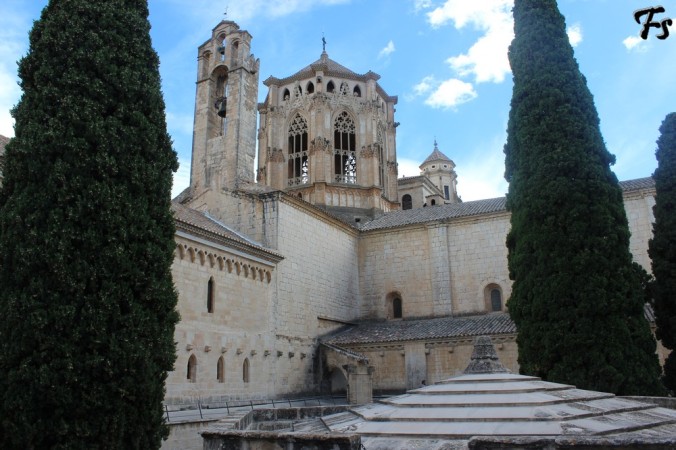 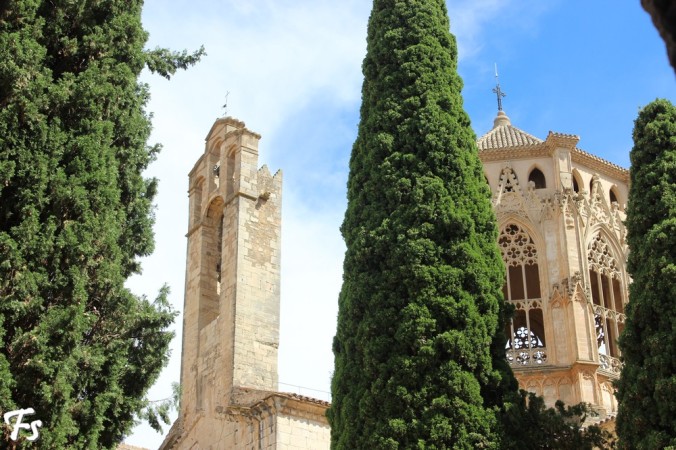 Interestingly enough, they had this (rather new looking) dragon for a stair rail, and a demon at the and of it. I took pictures, but didn’t realize how blurry they were, so I’m not putting them on here. I’ve got a reputation as a reasonably good photographer to loose, after all. 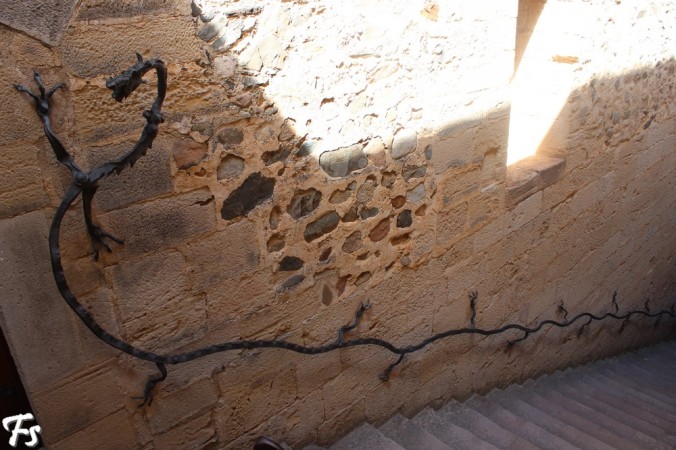 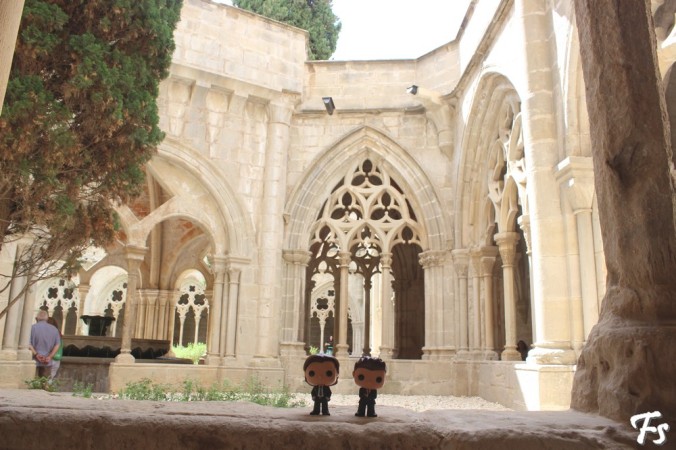 And because we’re us, we took FBI-Sam and -Dean with us. Those two never get to see anything outside of small towns in the US, so we took petty on them and decided to show them around a bit.

We also made a couple of trips to Barcelona, to get a good look at the city. It’s too big to do in one day; so if you ever have the chance to go to Barcelona, you should plan in at least a couple of days. Maybe even a week, just to be sure. There’s a lot to see.

The Cathedral of Barcelona

That thing is quite impressive; but then again, most old catholic churches and cathedrals are in Europe. They sure did invest a lot of money in their houses of God.

Funnily enough, this is called the Arc de triomf. They seem to have a couple of those around the world, which I didn’t know, since the one in Paris is the one you hear most of.

This can be found in a parc of which I seem to have forgotten the same, silly me. Sorry… 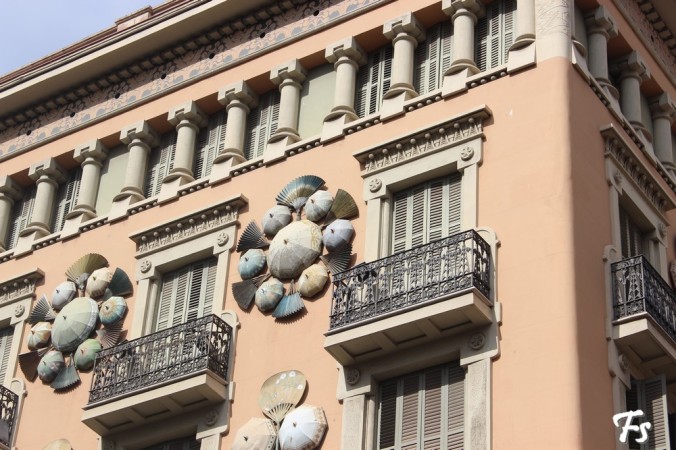 Now this house I really liked. And yes, those are parasols and umbrellas. 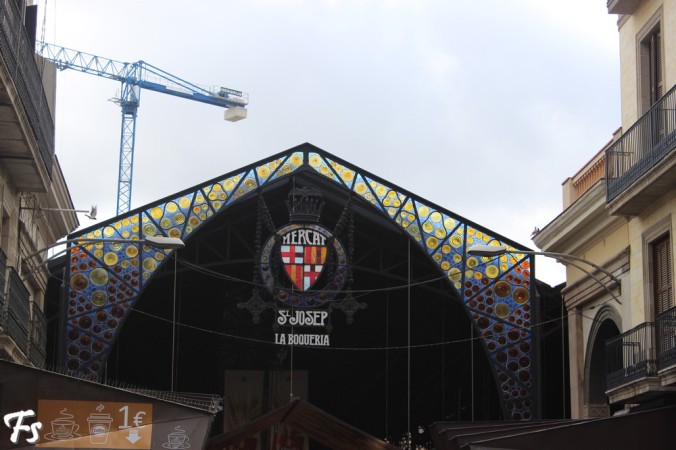 We also went to the market. There’s a lot of cool things to buy there, but I think you should hold on to your purses and wallets, because it’s super crowded, and better safe than sorry, right?

This brigde thingy – I’m sure it has an official name, but let’s just go with bridge-thingy – is really cool. It kinda looks like something you could find in an elvish kingdom, which is always cool. 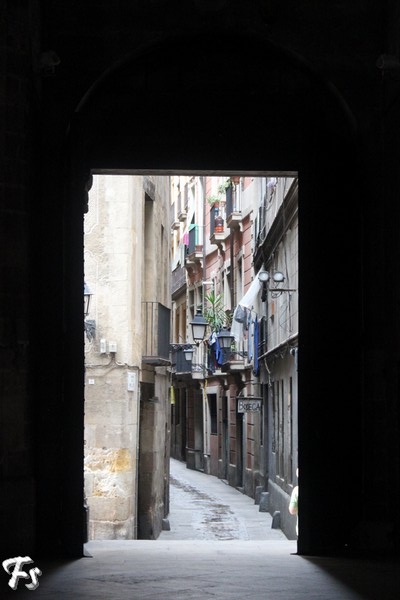 The narrow streets in the old parts of the city are really beautiful. And narrow. 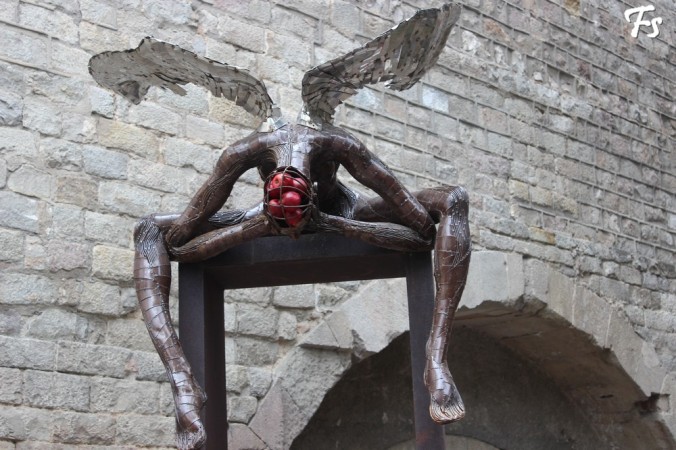 There’s also a lot of art all over the city, which is either cool, or disturbing. Depends on the person, I guess.

Of course, we went to see the Sagrada Família too. And let me just tell you, that church is really, really beautiful – and not just from the outside. Although taking a trip just to look at it from the outside it totally worth it as well; you don’t even have to go in.

But if you do, this is what you’ll miss out on.

I’m sorry for the fuzzy photos; my camera’s not all that good in the dark, and although it is anything but in there, the lighting still does not sit well with my stubborn camera. 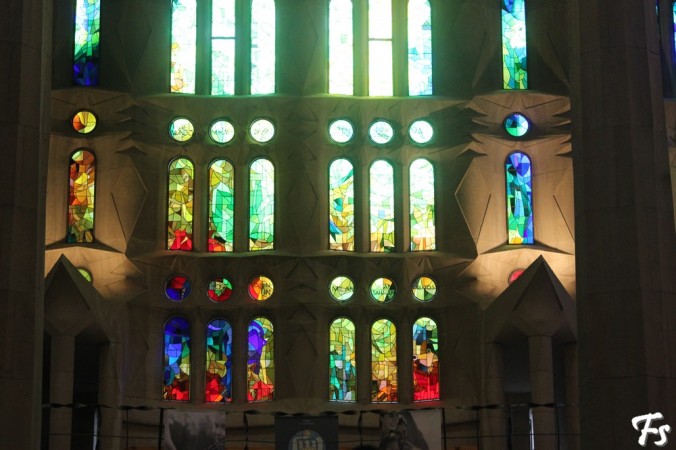 It looks super new, which I guess it is, because even though it was Gaudí who started the thing, he’s been dead for quite some time and never got around to finishing it, so other people have made it their mission to finish his work. And they’re doing a spectacular work, even though it may not look like Gaudí’s work 100%. It’s still incredibly beautiful – and so bright and colorful! It’s just amazing. 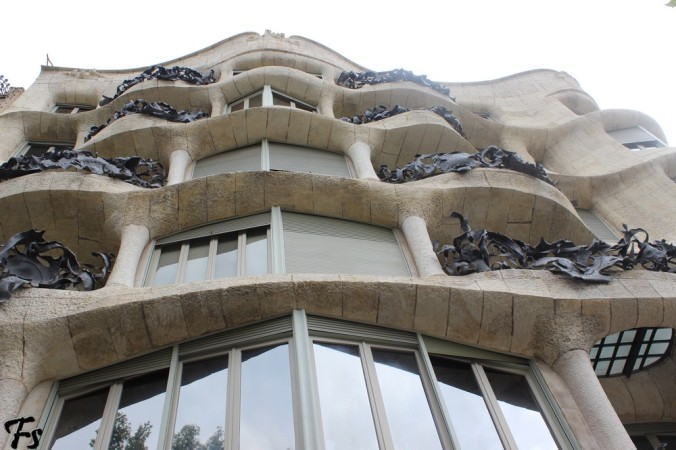 Gaudí’s work is all over the city. He designed and constructed a couple of houses; one of which is the Casa Milà/La Pedrera. We visited that one, because, sadly, we didn’t get around to visiting the Casa Battló, which is said to be even more impressive than La Pedrera. 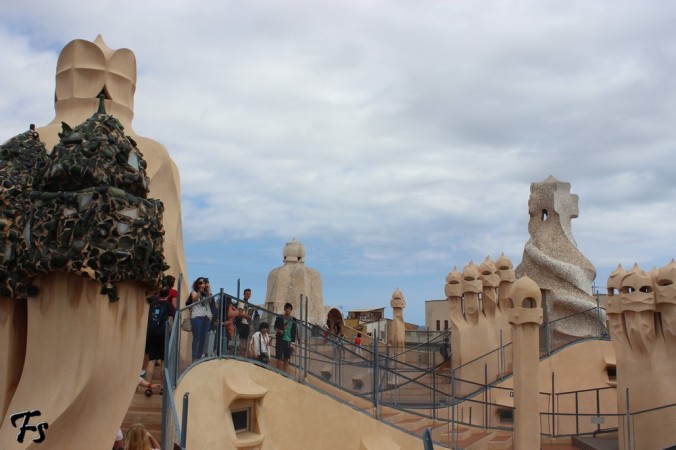 But La Pedrera is very awesome, too. Especially the roof. Seriously, the roof alone is totally worth the entry fee. 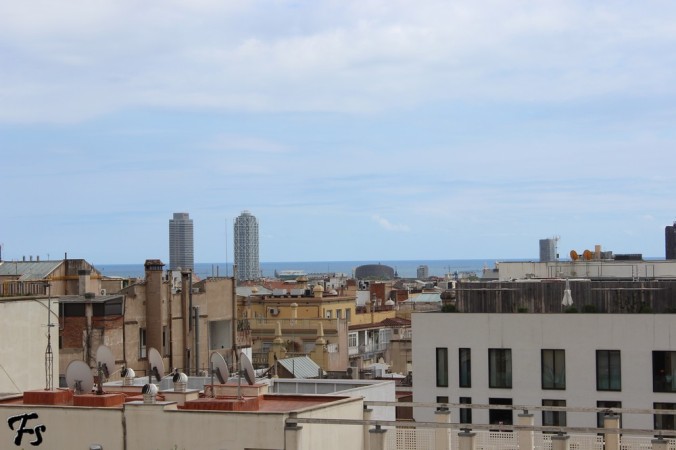 The view is amazing. 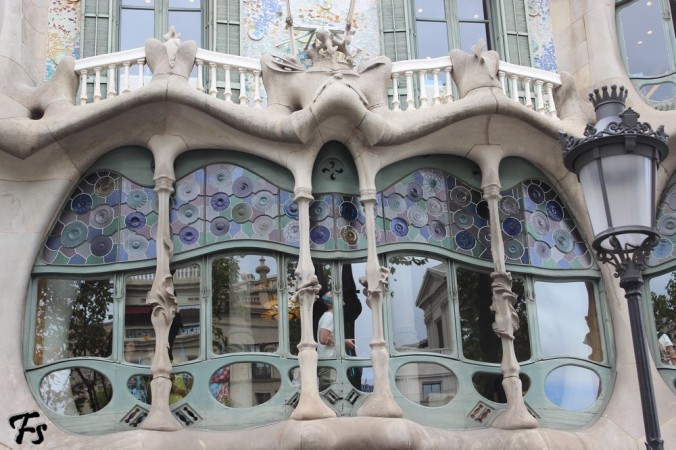 We walked past the Casa Battló. 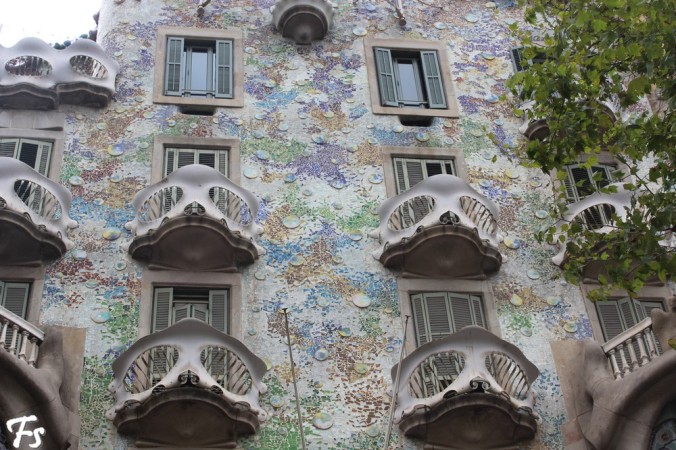 And the exterior alone is incredible. Seriously. I mean, Gaudí was a genius. He might have been high when he designed his buildings, but all of them are still standing, and still amazing to this day. Which is saying something.

Next stop: the Park Güell. 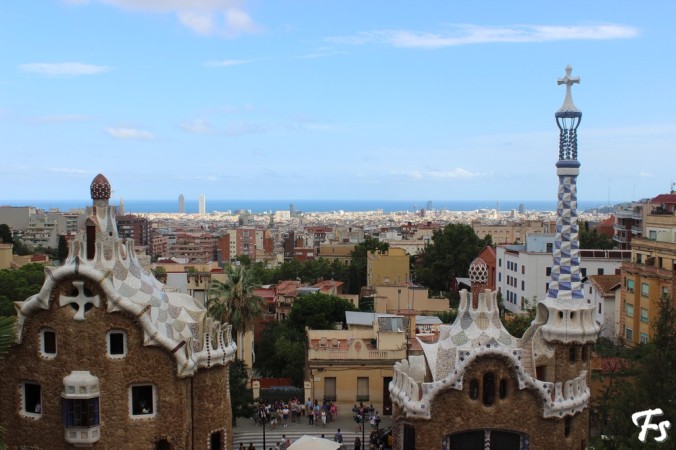 Another one of those things that is absolutely and totally worth the trip.

I mean, look at this. 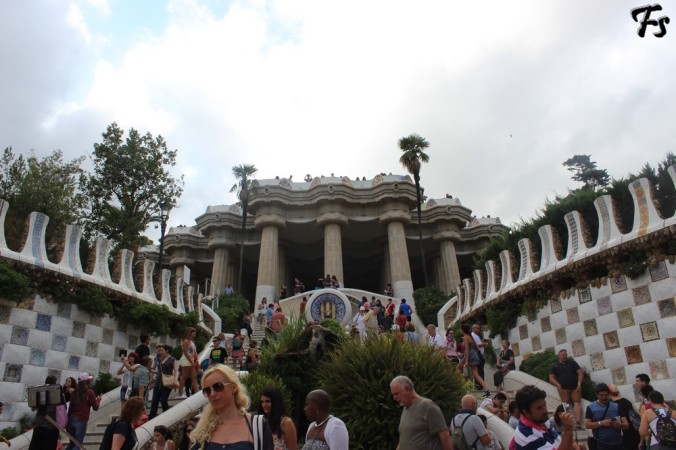 It’s a bit crowded, granted, but that’s what you get for going when every other tourist in Europe is going too.

Still worth it, though. 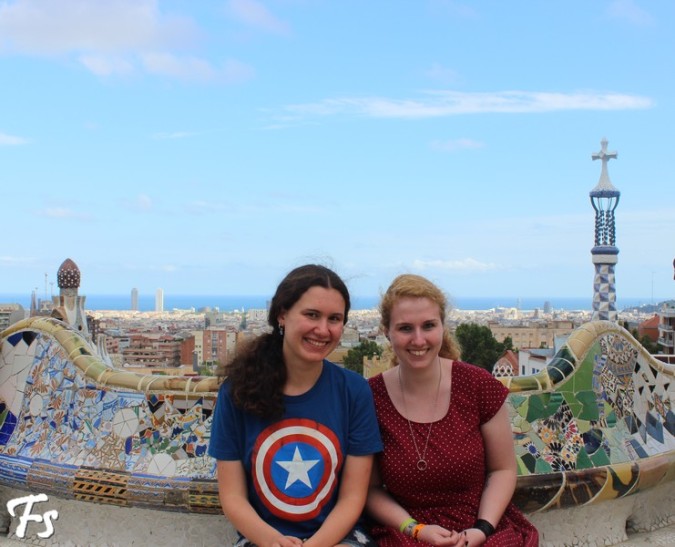 It made us two very happy little Hobbits.

Conclusion: Barcelona is one of the most beautiful cities I have ever visited, and I have visited a fair amount of them on a fair amount of continents. But it’s incredibly hot in the summer, especially because of the narrow streets. The air is just pressing down on you and there’s not much wind, even though it’s next to the ocean. So, little “insider” tip: if you feel like going to Barcelona, we totally incourage you. Don’t miss out on the opportunity to go there. But consider going in the fall – I’ve heard it’s quite beautiful then. It’s not too hot, but the sea is still warmed up from the summer sun, so you might still be able to go for a swim. And not die of the heat. And maybe it’s a little less overrun if you don’t go in the summer with the rest of Europe.

We didn’t go to the beach in Barcelona, mostly because the city was so crowded that we didn’t feel like burning in the sun while walking on a beach stuffed with people sweating. So we went to another beach, where we visited some friends. 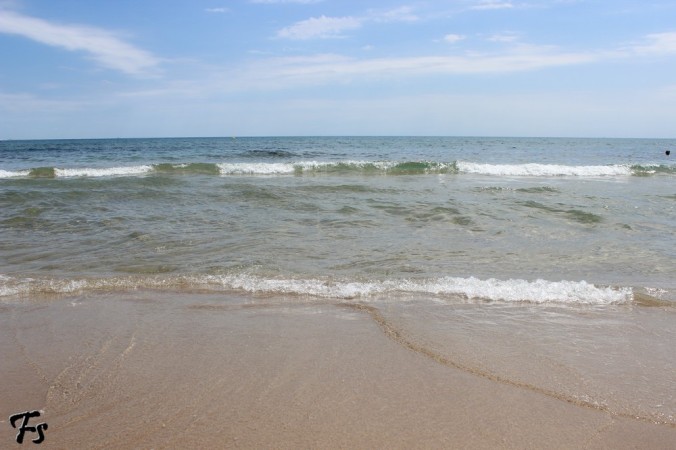 And a lot of people. But a lot less than we’d expected.

Frodo’s gonna kill me for putting this picture in here, but I really like it. At least she’s genuinely smiling for once; she rarely does that in photos.

Bit of a warning, though: should you find yourself at that beach in Torredembarra, mind your feet when you go swimming. There’s this bank of shells or stones, I’m not exactly sure, that are extremely sharp. Sharp enough to scrap half of Frodo’s foot and cut deep enough into my toe that I still have a scar, and it’s been weeks. So yeah, be careful. But still amazing and beautiful. 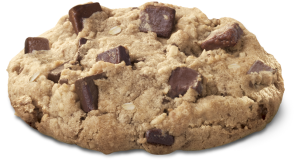 2 thoughts on “They’re Taking The Hobbits To Barcelona”