I think this week’s 5 Fandom Friday is going to be rather easy. 5 fictional vehicles we’d love to travel in – that’s not even a real challenge! There’s so many awesome vehicles that play great roles in stories despite only being vehicles. Although, small warning: we took the liberty to widen the meaning of vehicle to means of transportation in general. They might sound like the same thing, and they kind of are, but we still though we’d warn you. Vehicle always makes it sound like people are expecting cars. Please don’t expect too many of those.

You have now officially been warned and informed, so here it comes.

Nope, I don’t think anyone’s surprised by our first choice. After all, the ’67 Chevrolet Impala is not only Dean’s baby, but was also the brother’s home for a long time. Supernatural wouldn’t be Supernatural without that car. Remember season 6 episode 17, “My Heart Will Go On”, where Baltazar unsinks the Titanic because he hated the movie and the song? Sam and Dean weren’t driving the Impala, then, and boy, did it feel wrong. So yeah, the Impala is defintely our first pick when it comes to ficitional vehicles we’d love to travel in.

Or any other broomstick, really. Although it’s probably not the most comfortable way to travel, the idea to fly on a goddamn broomstick is awesome. Just imagine riding through the air, almost like your flying yourself, and you kind of are – except for that little detail of the broomstick between your legs. (Okay, that sounds dirty. You know what I mean). Who hasn’t dreamt of flying around on one of those in their childhood; even before Harry Potter, I always thought that it was a really cool way to travel. And the Firebolt is the fastest one out there, so of course we’d want to try it!

I’ve said in a earlier post that I’ve been a Star Wars fan most of my life, and the Millennium Falcon is an important part of those movies. I just love that thing. And flying through Galaxies at the speed of light? Hell yeah! I’d love to explore that thing, too. Just walk around in it to discover all the things hidden in there. It’s kind of roomy, and people have to sleep somewhere, right? I want to know where!

Or any other Great Eagle –  I’m not picky. Although I’m not quite sure the Lord of the Eagles would appreciate simply being used as a vehicle for fun… But I love the thought of travelling on the back of a giant eagle, don’t you? The fact that they usually turn up when people are in danger is kind of a bummer, though – I could really do without battling Orcs and fighting wars to change the world. Although that sounds kind of heroic and awesome, come to think of it… but who am I kidding, I’d die in the first two seconds of a battle, so thanks, but no thanks. But I’d love to fly on the back of one of Tolkien’s Great Eagles, to get back to the point.

Will you look at that, we opened and closed with actual vehicles that can’t fly. Talk about symmetry. Well, the Hogwarts Express is as much part of our childhoods as Hogwarts itself is, and what Harry Potter fan didn’t want to ride that train? After all, if you were on the train, you were going to Hogwarts, and don’t lie, we all wanted to go. It’s also a red steam engine that you can only get to through a magical door hidden in plain sight in the middle of London – how awesome is that?! It’s also where the Golden Trio first met, and there were some really important character introductions done while Harry was on that train, so besides being an really cool train, it’s also an important part of the story. 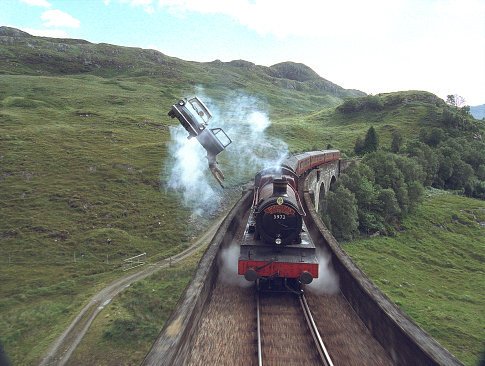