Although HobbitCon was in April (4.4., 5.4., 6.4.), so we are late with this, we still want to talk to you about HobbitCon, because HobbitCon is simply amazing. It was our first con ever, and man, it was a great choice for a first con. HobbitCon takes place in the Maritim Hotel Bonn, Germany, over Easter (at least that’s when the last three have been, we’ll see about the next one), and is, as the name suggests, a convention dedicated to Tolkien’s world.

Just a quick history lesson about Fed-Con events, who organize HobbitCon (amongst others). I don’t know much about Fed-Con in itself, but I do know that they started RingCon in 2002, after Lord of The Rings – The Fellowship of The Ring first came out in cinemas in December 2001, a convention dedicated to Peter Jackson’s movie(s) and Tolkien’s work in general. The “Deutsche Tolkien Gesellschaft” (German Tolkien Society) was originally involved in the first few times it took place, but now it’s just Fed-Con. The con grew bigger and bigger, and since 2007 it’s not only about Middle-Earth, but about Fantasy in general. So, after the Hobbit-movies came out, the first one in 2011, Fed-Con decided to make another convention only about Tolkien’s world again. And that, my friends, was the birth of HobbitCon. Enjoy this free piece of useless information.

Anyway, back to HobbitCon 3. Here’s a list of the attending guest stars:

Mark Ferguson, who kind of moderated the whole thing (and did so for HobbitCon 1&2 as well, as far as I know). The guy is extremely funny, which made HobbitCon all the more amazing. He also played Gil-Galad in The Lord of The Rings, where he has about 0,8 seconds of screen time, and only in the Extended Edition. Now you know. (And, for those who were there because it’s kind of complicated to explain: let’s forever comemorate the Pornobalken.)

Peter Hambleton. He plays Glóin (father of Gimli), and frankly, he is quite unrecognizable without his costume.

Adam Brown – Ori (youngest of the company. And Adam is at least as cute as Ori. And he’s got a lot of really funny, kind of embarassing stories to tell, which is hilarious)

Jed Brophy – Nori. If you ever see Jed on stage, don’t be surprised, it seems he’s always that hyperactive. From what I gathered, he’s not on drugs, so must be he simply has about as much energy as a five year old on Speed. It’s incredible.

Stephen Hunter – Bombur (that’s the fat one, for those who don’t know.)

William Kircher – Bifur, or The Guy With The Axe In His Head. Mr. Kircher actually speaks a bit Khuzdul! And boy, can he sing. He’s also Bombur’s and Bofur’s cousin.

Graham McTavish – Dwalin. That’s the one with the epic mohawk in the Battle of Moria flashback we see in An Unexpected Journey. He currently stars in Outlander – and the guy arrived on stage for the opening ceremony in a Kilt. If that’s not awesome, I don’t know what is. 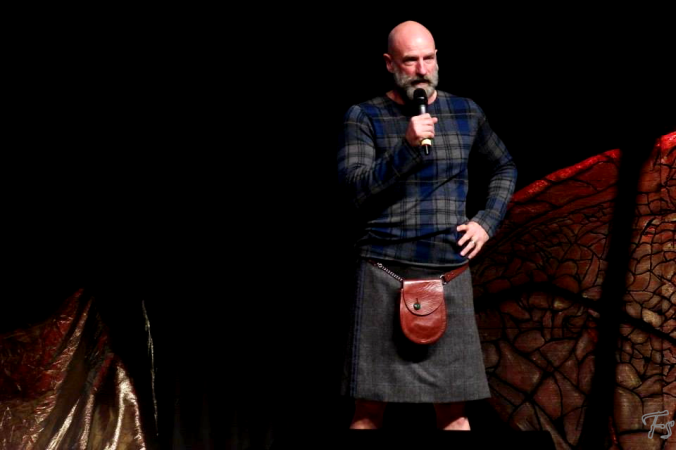 Ken Stott – Balin. He’s the one whose grave we see in The Fellowship of the Ring. The wise one of the Company, and Dwalin’s brother.

Sylvester McCoy – Radagast The Brown. That man is amazing! And tiny. He was the Doctor once as well, which makes him even cooler. He kept walking around during his panels, made the people who wanted to ask him questions follow him around the room, and kept getting sweets from everyone. 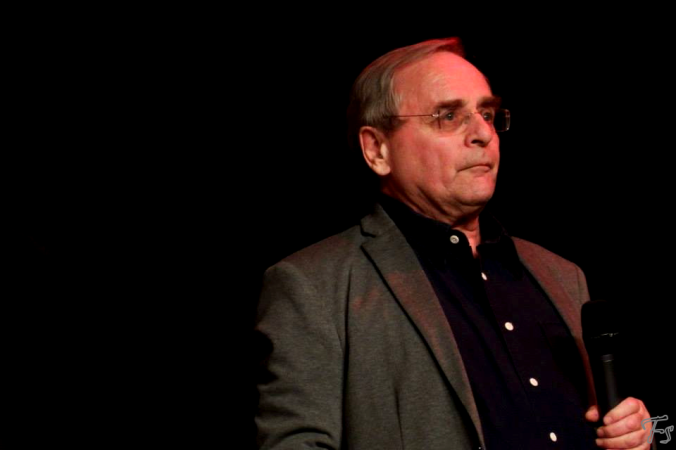 Lawrence Makoare – Bolg. Lawrence is a really big guy, a lot of fun, and played a couple of characters over the years in Peter Jackson’s movies (Lurtz, for instance. That’s the Uruk-hai that kills Boromir in The Fellowship of the Ring).

Luke Evans – Bard the Bowman. Another one of those with the great voices. Fans asked him to sing a couple of times, and once you’ve heard him sing, you’ll know why! For those who haven’t gotten the chance yet, wait until the new live-action Beauty and The Beast comes out, in which he’s playing Gaston and will have a lot of singing to do (Emma Watson is in that movie as well. And Sir Ian McKellen. In case you needed an even better reason to look forward to it)

John Bell – Bain, son of Bard. Nickname: “the shoulder”, because Bard uses his son’s shoulder in The Battle of the Five Armies to let the arrow fly and kill Smaug the Dragon. That kid is so young! He’s only 17. Not even legal yet. Also, his birthday is on the same day as mine, which I think is a little cool. Although he’s younger than I am.

Now, the way HobbitCon works is, there’s panels, of course, some of them with one actor, some of them with two or more, and every actor has two panels. So, even if you happen to miss the first panel, there’s still another one, which I think is great, because there’s a lot of other things to do as well. There’s a hall dedicated to merchandise – mostly related to Fantasy – and stands in front of it as well, and it’s kind of like a marketplace. There’s also these kinds of lectures or talks, held by the Deutsche Tolkien Gemeinschaft or other people passionate about Tolkien and his work. So even if there’s no panel, there’s always someone to listen to if you don’t feel like hanging around the “market place”.

I also liked the way the whole photo op and autograph business was handled. You had different possibilities to go get your picture or your autographs, the last one being on the last day, with no panel being at the same time, so you didn’t have to miss out on any actor.

Another really cool thing was this thing called “Curse of Mirkwood“. It was a haunted house, made by fans, where you had to walk through and it was really foggy so you couldn’t really see much, and things would just start moving or people you thought were just props turned out to be real people, and stuff like that. It was awesome. I’m usually not a big fan of haunted houses, mostly because they either scare the living crap out of me or are lame (there is no in between), but this one was really cool. And, as the name states, it was all Lord of the Rings related; and at the end, we got our picture taken with a Ringwraith – how cool is that! I mean, how often can you say that you and your friends got to take an awkward family photo with a Nazgûl?

Besides the talks and the panels, there were also workshops you could participate in. There was a choir that sang a Lord of the Rings-mashup (“Into the West”, “Gollum’s Song”…) at the closing ceremony, or one with a stunt man where you could learn how to fight, and so many other cool things! They had a costume contest as well, and Jesus f*cking Christ, the talent and attention to detail and patience some people have! There were so many incredible costumes. People walking around in armor, the best ones being this trio who dressed up as Thorin, Thrór and Dáin, or this other girl cosplaying Thorin – and I sh*t you not, had I not known it was a girl because they told us as much, I would have taken her for a guy. People running around as elves, or Hobbits, dwarves and dwarf-women, wizards, orcs, Uruk-hai, people of Laketown, Smaug… one girl even cosplayed the Balrog – how cool is that?

The last absolutely amazing and hilarious thing to mention is this “comedy hour”-thing. Mark Ferguson gave Jed Brophy, Mark Hadlow, Peter Hambleton and Stephen Hunter an unscripted sketch to do, where they had to improvise getting one of the fans to something they wanted to do. One fan called out that he wanted to go bungee-jumping in New Zealand, so he ended up on stage with them and they got him to New Zealand to go bungee-jumping, playing out the whole journey. They were all so much fun, and they seemed to have so much fun, it was incredible. And I bet that’s an experience said fan will never ever forget. 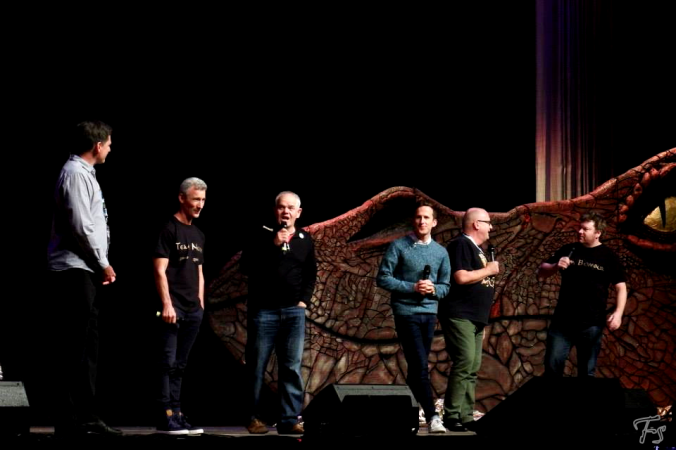 So, HobbitCon was truly amazing. It was incredibly well organized – I guess what they say about Germans is right, they really are rather organized people – and everyone was having a great time, so the atmosphere was so friendly and great that no one wanted to leave at the end. The guests seemed to enjoy themselves so much as well, and that really does make for one hell of a fun weekend. They walked around, so if you happened to bump into one of them and felt like talking to them, no one was there to stop you, because the fans are just so chilled and the actors so cool that they don’t seem to need too much security (except for Luke Evans). We met so many cool and nice people, and it was just extremely fun to find yourselves amongst so many other people who were pationate about the same thing as you. Should you ever find yourself in Germany over Easter, do pay a visit to HobbitCon. It’s a convention, so yeah, it costs, but it is so worth every penny that you actually forget about the money, which is saying something! And since they did announce that there is going to be a HobbitCon 4 (it could have ended with 3, since we now got all the movies out – but next time we’ll get to talk about the Extended Edition of Battle of the Five Armies as well. I hope to god or whatever other deity is listening that Peter Jackson won’t disappoint with that, and clear some stuff up. But that’s another post for another time), you still have a chance if you missed it last time! We will definitely be going, even if we end up even more broke after it. Because that’s just how awesome it is.