“…the fandom life came into my dorm room and told me they had a Lord of the Rings locations guide”. Or: the story of how this random girl opened the door to the dorm room and turned my life upside down. Although that sounds either like it’s the start of an adventurous adventure, which it wasn’t if we’re honest, or the start to a sappy rom-com, which it wasn’t either.

So let’s just start at the beginning. I’m going to tell you the story of how we met, and then we’re going to dig deeper into everything Middle-Earth related we did and saw. Now, if you want to know about the other stuff too, the stuff that was not Middle-Earth or Lord of the Rings or The Hobbit related – because, believe it or not, we did visit the rest of the country as well – do tell us, and we will gladly talk about that as well. But for now, it’s just going to be fandom related, because, after all, this is supposed to be a fangirl-blog, not a travel-blog.

Where was I… Ah, yes. The beginning. I arrived in Auckland, New Zealand, on January 29th 2014, on my own, exhausted, after way too many hours in planes and no sleep whatsoever. I checked into the hostel at 4 p.m., and went to sleep right after that, not even bothering to put on my pajamas or anything, because that’s just how tired I was. I got up at 7 a.m. on the next day, to go and get a real first good look at this beautiful country that I had just arrived in. And I did, kinda. I walked around a little, sat down at the harbor and just stared, because even the city of Auckland was prettier than what I was used to, and everything was so colorful! The water, and the trees, and everything. But it got boring real quick, and because I’m socially awkward and was scared to get lost, I walked back to the hostel, sat down on my bed and started planning the next couple of weeks. Because I had come there with no plan at all. I had that first week in Auckland, and after that, nothing was decided.

So there I was, sitting on the bed, alone in the 8-bed dorm, with my New Zealand guide, wondering as to where I would head to next, when the door opened and an exhausting looking girl with the same curly hair as me came in. We started to talk, and of course, one of the first question you ask people you find to be from the same corner of the Earth as yourself on the other side of the planet is why they chose to travel this far. Why New Zealand? Well, my answer was quite simply: Lord of the Rings. And so this wonderful stranger pulled out a Lord of the Rings locations guide – which I did not even know existed – out of her bag, and things were decided: we would travel together.
On the next day, we walked about the city together, getting to know each other, and realized that we had quite a lot in common. We took our idea of traveling together to the next stage and started planning – first stop: Hobbiton. Now, Hobbiton is, as some of you may or may not know, the little town where the hobbits in both “The Lord of the Rings” and “The Hobbit” live in (I am well aware that there is more than one town in the Shire, it is just the only one we ever see in the movies). After filming “The Lord of the Rings”, they tore down the set, but people still came to look at the place. So, in 2010, when they go the green light to do “The Hobbit”, Peter Jackson and whoever else was involved, went to ask the people who own the farm the set was built on if they could build it for real this time so it could stay even after filming was done. And so they did.
So much for the history of the Hobbiton Movie Set. Let’s get into it already.
The weather was great that day, which was a relief. We were a whole group of people and had a guide (you always have a guide, you can’t just walk in there and visit on your own); to be honest, we thought it would suck at first, because we’re both not big fans of guided tours, but the guy did a good job, he was fun, he had a lot of funny stories and did-you-knows to tell us, and you could just tell he was passionate about what he was doing.

Now, the set. When you walk in, it’s like walking into a dream. It’s perfect. It’s like everything you imagine, and better, because it’s real. There’s all those incredible details that make it all the more amazing (and really don’t make you envy the people who had to build the thing, because that must have been a LOT of work), all the tiny chairs and benches in front of the Hobbit holes, the perfectly kept gardens, the real fruit on the trees, the smoke rising from the chimneys, the clothes hanging to dry outside… Everything just looks as though there were actual Hobbits living there, hiding behind their colorful round doors until the Big Folk are finally gone and they can come back out.

They have holes for scale, meaning that there are small ones for when a human (Gandalf, to be precise, since he’s the only Non-Hobbit we see in Hobbiton) walks past so it looks Hobbit-sized, and normal-sized ones for when there’s a Hobbit standing next to it so that it looks like it’s made for them.
We took hundreds of pictures, of course, and could even go into one of the holes. There’s not much behind the door, though. Just a wall and a dirt floor.
We got to wander the streets of Hobbiton up the hill to Bag End, which even has the sign! You know the sign. The “No admittance except on party business” sign. And then we went to the Green Dragon, the Hobbit pub (it’s normal-sized, thank God, cause otherwise it would have been really uncomfortable), and again, all those details! We had an ale (that’s included in the price of the tour) and a muffin and sat down in the gardens decorated for Bilbo’s party with a beautiful view over the lake and Hobbiton.
On the way back we listened to “I See Fire” by Ed Sheeran and felt the slight sadness of leaving something that almost felt like home tuck away at our hearts.
It was one of the best days of my life. 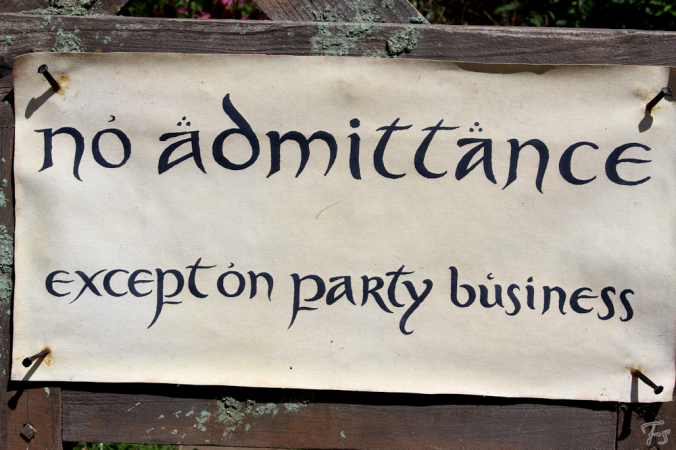