We finally got a Supergirl trailer! Or first look or whatever the kids call it these days. So, here’s a super quick list of first impressions (I’m not going to do a full review, ’cause we’re going to review the show once it’s out): the first thing I noticed – and liked – was the fact that they mentioned Superman in the first few minutes.

That was cool; but I also liked that he wasn’t the main focus. He’s somewhere in the outbounds of the story, but he’s not part of it. After all, this is a show about Kara Zor-El, played by Melissa Benoist, and not Kal-El/Clark Kent. Then, I think I’m really going to enjoy the character of Kara. She seems to be this awkward lovable character; underappreciated assistant by day, superhero by night. And does she look a little like Felicity with glasses or is it just me? It also appeared like they will montage through the costumes, which would be cool, because it wouldn’t be realistic if she just magically found the perfect suit on the first try. And HELLO?! Female superhero getting her own TV-Show?! How awesome is that? Took them long enough! So now, after having all those male-led TV-Shows (Arrow, The Flash… which, don’t get me wrong, I absolutely adore, but it’s just not the same because they’re guys and now we finally get a girl!), we finally, finally get a female main character who, from the looks of it, seems to be well-written, though maybe a bit cheesy – which, in itself, is not a bad thing. Even though I am not someone to enjoy girly and sunshiney characters easily, it’s a nice change to have a superhero protrayed as something other than somber and with a dark past. I guess we’ll see about that. If they do it right, this could be one hell of a show, because it will show little girls out there that they can like Disney princesses and pink and still be badass. I, for one, will be waiting for this one impatiently. What is also very important: there is NO sign of a love triangle! Romance of course but no annoying love triangle!

It’s set to start in November for a Monday night 8 p.m. on CBS and it is developed by Arrow & Flash creator/producer Greg Berlanti and Marc Guggenheim. 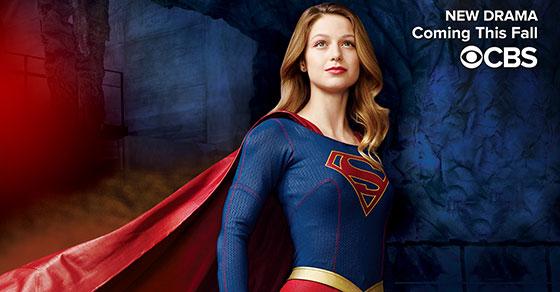